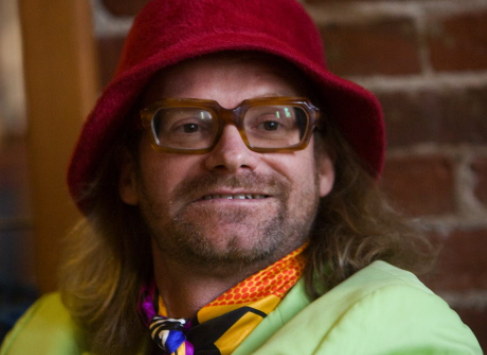 PORTLAND, Ore. – In this day and age, it’s almost unthinkable for doughnut lovers to not have the ability to order doughnuts in a wide variety of flavors and combinations at doughnut shops in Portland and across the United States, but it wasn’t always this way.

Before Voodoo Doughnut the most exciting way to eat a doughnut was to order one with sprinkles, but times have changed and you can now order gourmet style doughnuts at almost any doughnut location in the world but all of the imitators can’t beat delicious doughnuts created by Voodoo doughnut on a daily basis.

Since opening in 2003, the company has multiple locations in Portland, Denver and Austin Texas and Tres Shannon has turned doughnuts from a boring coffee break treat into something that’s blogged about by foodies

There’s no doubt that Tres Shannon can be considered to be an “ambassador of doughnuts”, and Portland Oregon as well, since anytime he’s spotted on the streets of Portland he always gets requests from fans who want to have their pictures taken with him.

Tres Shannon has also appeared in the hit television show Portlandia and in the documentary Heaven Adores You.

Like many well-known brands in Portland Oregon, and across the United States, it wasn’t easy building the Voodoo Doughnuts brand, and the road from getting their first location up and running to where they are today is a journey filled with struggle, but the end result has been worth it.

Tres and Cat Daddy were introduced to each other by Tres’ mom and thought they would always start a business together.  They came up with the idea to start a funky doughnut shop, learned some from pastry chefs at doughnut camp, rented a little hole-in-the-wall retail location in Portland, and the rest is history.  The two partners did not have any formal business training, but have seen consistent and incredible grown and success, ever since opening their doors 8 years ago.

They have taken a very different approach to business that has helped differentiate them from anything else out there; from performing wedding in their stores, accepting only cash, being open 24 hours, to having a “cock and balls” doughnut that has gotten them much attention…good and bad.

Expanding outside of the Northeast has been a calculated move, and they have been welcomed in Denver with open arms.  From the mayor performing the ribbon cutting, to business coverage in the Denver Post, to having great new neighbors.  Everyone has been excited to have Voodoo come to Denver.

Tres shared with us how they got started, what it was like opening the first shop, what success has allowed them to do, why they chose to call it Voodoo Doughnut, and some hints of what might be coming down the track for Voodoo.  You are going to love this one. 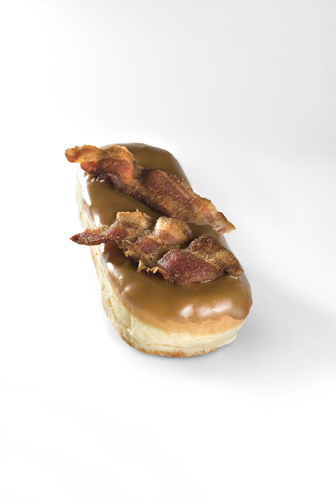 If you ask anyone who lives in PDX and has visited Voodoo Doughnut they will tell you that they have their own personal favorite but thanks to their bacon wrapped maple bar Voodoo Doughnut was officially “put on the map” of foodies across the United States.

Over the years Voodoo Doughnut has enjoyed lots of publicity from celebs like Jay Leno, Anthony Bourdain and Morgan Spurlock. Their flagship Portland location has also been featured on countless television shows that have been filmed in Portland over the years including Leverage and Grimm.

Just about everyone loves doughnuts, and like hamburgers, they are almost instantly recognizable anywhere in the world but was the Voodoo Doughnut brand successful from day one after they launched their first location in 2003?

Were you successful from day one?

Did you know people would become fanatics for your product?

I did underestimate people’s total fanaticism for doughnuts. There are people who just go crazy for these things. As a kid, I wasn’t even allowed to have them. Cat Daddy would get them every Sunday. People just love doughnuts. It’s a real comfort food. It’s cheap.

We just can’t make enough doughnuts to keep it running, so we opened up a second location right across town on 15th and Davis. We’re actually feeding the store downtown with doughnuts with that one. We decorate them downtown, but [the second store makes] the shell. On top of that, we still make doughnuts downtown, of course.

Do you advertise the business?

We’ve done all our marketing. One of our things we’re pretty adamant about is we don’t pay for advertising. We pay for yearbooks and weird little high school things and old punk rock magazines. I bet we’ve spent less than $5,000 in advertising since we’ve opened. People have told us we’ve had $10 million to $20 million worth of advertising [through media appearances]. That would be a really interesting thesis for somebody. 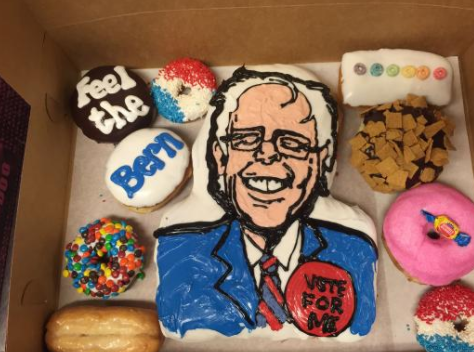 Thanks to Voodoo Doughnut, Tres Shannon has earned the nickname “Mayor of old town” by his neighbors and like a mayor, he’s not been afraid to promote his city and brand when politicians come to town.

During the 2016 Presidential Campaign Voodoo Doughnut created doughnuts in honor of Presidential hopefuls Bernie Sanders and Hillary Clinton. His doughnuts were warmly received by the Sanders campaign and he even met with Bernie when he stopped in Portland last May.

While most people in liberal Portland greeted the Bernie-based treats warmly, some angrily insisted they would never darken the shop’s door again. “Trump supporters like doughnuts, too,” said Voodoo’s owner, Richard “Tres” Shannon. “I’d love to do a Donald Trump doughnut with flames and devil eyes, but I don’t want to alienate an entire group of people!”

On Tuesday, as Oregon voters go to the polls, Mr Shannon said Voodoo would probably make a Bernie doughnut and a Hillary Clinton doughnut, in the interests of balance. The political doughnuts are for the shop’s display only, not for sale – although Mr Shannon did deliver a box to Sanders campaign staff when the Vermont Senator held a rally in Portland in March. 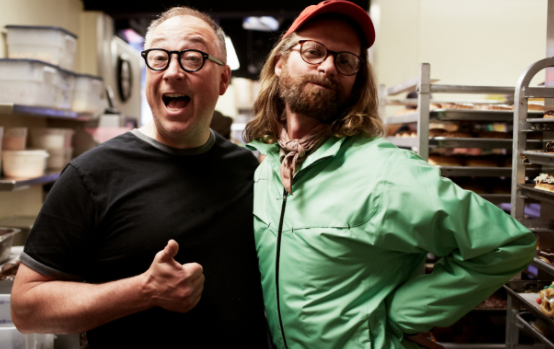 Thanks to the mainstream success of Voodoo Doughnut Tres Shannon has been able to translate his success into other areas including a music label called Voodoo Doughnut Recordings.

1) For now, Voodoo will be releasing 7″ vinyl singles, though albums may come down the line. The plan is to release one a month in 2014 in editions of 1,000, with a bonus making it a baker’s dozen. Synergy!

2) On that note, the label’s A&R desk has a heavy ear toward doughnut-related content. Artists looking to cash in on that Portland C.R.E.A.M. should consider going full pastry on their next demo: “We would like one side of the single to be at least peripherally related to doughnuts,” Voodoo explains. “The song on the other side of the single can be about anything you want. Except for cupcakes.”

3) Voodoo isn’t putting a limit on its genre options, including spoken word, though — like simple carbohydrates — the company has an affinity for rock music. Its first two releases are by the Deep-Fried Boogie Band (Sam Coomes of Quasi) and the Doughnut Boys (Dan Eccles of Richmond Fontaine).

Learn more about Tres Shannon and Voodoo Doughnut by visiting their Portland Oregon locations at 22 SW 3rd Avenue, 1501 NE Davis Street or check them out online at http://www.voodoodoughnuts.com.