There’s no doubt that Portland has many great painters and street artists including Chris Johanson, a well-known artist who grew up in the skateboard / punk rock scene of the 1980’s and would go on to become one of the most well-known self-taught artists in the world.

Now living in Portland Oregon with his wife Jo Jackson, another artist, Chris Janson’s work really took off when he moved to San Francisco in 1989 to attend City College. While in college he would hone his well-known style by drawing cartoons on lampposts across the city.

At the same time his work was taking off Keith Haring was shocking New York with his similar style of pop / street art while the careers of other well-known street artists like C215, Mr. Brainwash and Shephard Fairey were just taking off.

Chris Johanson’s work set the stage for other self-taught artists to come up after him because prior to the 1980’s it was thought that if you wanted to be an artist, you had to go to art school and the work of self-taught artists was looked at as outside art.

Thankfully, due to the success of artists like Basquiat, Johanson and other street / pop artists, the work from self-taught artists is appreciated and collected all over the world.

Johanson was born in suburban San Jose, California in 1968. He grew up skateboarding, attending punk rock shows, drawing, and with a dry yet sharp sense of humor. He has no formal training in art, learning some technique by painting skateboards and houses. He was a prominent ‘zine artist, and his publication “Karmaboarder,” a skateboarding and art zine he published in the early to late 1980’s, helped shape what later became initial well-known works.

He moved to San Francisco, California‘s Mission District in 1989, where he became a member of the local art community, initially drawing cartoons on lampposts and bathroom walls using black Sharpies. From 1989 until 1992, Johanson attended City College of San Francisco. In 1994, Johanson did one of the initial board graphic runs for a new San Francisco-based skateboard brand, Anti-Hero, which brought his art to a wider audience. Also, during this time, he played in a band called “Tina, Age 13,” which was scrawled on a drawing the band came across randomly. The band toured several times, and record numerous 7″ records, an EP called “The Alcoholic Father of My Inner Child,” and a full-length LP, “Good Feelings,” which remains officially unreleased. In 2004 he and Jo Jackson, an artist and his wife, moved to and bought a home in Portland, Oregon.

Johanson achieved international fame after participating in 2002 Whitney Biennial exhibition. The next year he was one of winners of the San Francisco Museum of Modern Art‘s SECA Art Award. 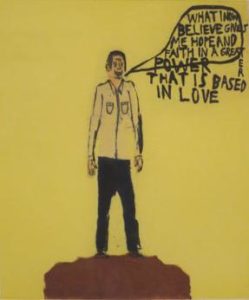 One of the great things about Chris Johanson’s artwork is that it’s uplifting and even inspiring because he’s not afraid to use his paintings or installations to promote a positive message that will also inspire others.

To learn more about his work please visit http://www.altmansiegel.com/artists/chris-johanson/