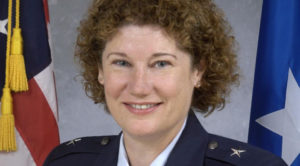 One of the most well-known people to call Portland Oregon their hometown is former NASA astronaut Susan Helms.

Born in February of 1958, the now-retired Lieutenant General in the United States Air Force always wanting to be an astronaut when she was growing up. This led her to join the Air Force Academy after high school then after years of training she was able to accomplish her goal of becoming an astronaut in 1991.

After a 12-year NASA career that included 211 days in space, Helms returned to the U.S. Air Force in July 2002 to take a position at HQ USAF Space Command. After a stint as the division chief of the Space Superiority Division of the Requirements Directorate of Air Force Space Command in Colorado Springs, Colorado, she served as vice commander of the 45th Space Wing at Patrick Air Force Base near Cape Canaveral, Florida. She then served as deputy director of operations (Technical Training) for Air Education and Training Command at Randolph Air Force Base near San Antonio, Texas. Helms served on the Return To Flight task group after the Columbia accident. She was promoted to brigadier general in June 2006 and became commander of the 45th Space Wing on the same day of her promotion.

Helms was promoted to major general in August 2009.  She served as the Director of Plans and Policy, U.S. Strategic Command, Offutt Air Force Base, Nebraska. She was directly responsible to the U.S. Strategic Command commander for the development and implementation of national security policy and guidance; military strategy and guidance; space and weapons employment concepts and policy; and joint doctrine as they apply to the command and the execution of its missions. She was also responsible for the development of the nation’s strategic war plan, strategic support plans for theater combatant commanders and contingency planning for the global strike mission.

As a flight test engineer, Helms has flown in 30 different types of U.S. and Canadian military aircraft.

What Is She Up To Today?

Following her long and distinguished career in NASA and the United States Air Force, Susan Helms now lives in the Colorado area and is involved in a wide variety of endeavors including serving on the board of directors of Concho Resources, a hydrocarbon exploration company based in the Midland Texas area.