Over the years Portland Oregon has earned the recognition of being a top destination in the United States for breweries but, Portland is also an excellent place to visit if you enjoy coffee and one of the best coffee shops in Portland to visit is, of course, Coava Coffee Roasters.

Founded by a Portland’s Matt Higgins in 2008, the company started in his garage after Matt had the desire to start creating coffee which would be exciting for local Baristas and everyday people to enjoy.

Matt has a rich background working in local coffee shops where he learned the art of brewing and creating a fine cup of coffee. He then took those skills and applied them to starting his business which is known and loved in Portland today. 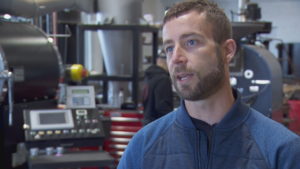 The Road To Small Business Success

Like many small business owners, Matt road to launching his coffee shop was a bumpy one and he even considered quitting on more than one occasion and going back to his job.

I definitely considered other careers. This is my 13th year in coffee, as a barista and everything. I’ve been roasting for seven years and been buying green coffee now for three years, but when I first started, I was a barista while doing my undergrad. I graduated from the University of Oregon in 2003 with a German major and Business minor and moved overseas to be a translator, and I was translating for an eco-friendly agricultural company called Neudorff. I just realized I really did not enjoy what I went to school for, and I realized that in high school, and through college, I’d been a barista. And I really love coffee. This is a product I believe in and it’s my passion. I flew back to the United States and found a shop that had a roaster. At the time it was Pacific Bay Coffee Company. They’ve since changed owners and it’s a completely different program. I purposefully sought them out, came outboard and would come in on all my days off and just stand next to the roaster. John Laird was the owner. And eventually, I started apprentice roasting, became their roaster, and knew that I wanted to take coffee as a career path.

With great coffees in hand, Coava began sharing them through a handful of Pacific Northwest coffeehouses. These early believers led the way for Coava to open their first public brew bar and roastery in Southeast Portland in 2010. Starting in 2015 and completing in 2017, Coava opened doors to a humbly built, yet truly state of the art 10,000 square foot roastery in SE Portland. The new facility houses Coava’s headquarters, training facility, quality control, and general coffee production. Coava now has three cafes in Portland, Oregon, a fourth in San Diego, California and a robust national wholesale client list.

Coava has been recognized for the following awards: 1st place (three consecutive years) as the Northwest Regional Barista Competition for brewed coffee and espresso, and two consecutive years as 1st in the Brewer’s Cup coffee championships.

2018 Oregon Small Business of The Year

Thanks to his hard work and dedication to producing excellent coffee that PDX People enjoy plus his commitment to giving back to the community, Matt was named the 2018 Oregon small business of the year.

When informed of the award recently Matt said: “I am very humbled to have been nominated and awarded Oregon’s Small Business Person of the year,” Higgins said. “Coava’s growth and success have been a huge team effort and a special thanks are in order to all of the Coava team, all the amazing professionals at the SBA, as well as our phenomenal customers that support us every day and make Coava possible.”

Learn more about Matt Higgins and Coava Coffee Roasters by visiting their website at https://coavacoffee.com