Are you a hard rock fan? If so, you may not know that one of the greatest hard rock guitarists, Paul Gilbert, lives in the Portland Oregon area.

Recently voted one of the “Top 10 Greatest Guitar Shredders of All Time” Paul Gilbert is a brilliant guitarist who has played with most of the top names in hard rock over the years including Ozzy Osbourne.

Gilbert looks like an unassuming suburban dad these days but once he starts playing, it’s easy to lose yourself in his music as he shreds his guitar with seemingly unearthly skill.

After moving cross country to Los Angeles in the early ’80s, Paul Gilbert attended the Guitar Institute of Technology then would form his first band, Racer X.

During his time with Racer X, Paul Gilbert quickly built a reputation in the hard rock world thanks to his precision playing and extreme techniques that made many people think of the Judas Priest.

Racer X built a rabid fan base of hard rock fans in the United States and enjoyed the popularity for a while before going the members of the band went their separate ways in the late 1980’s. 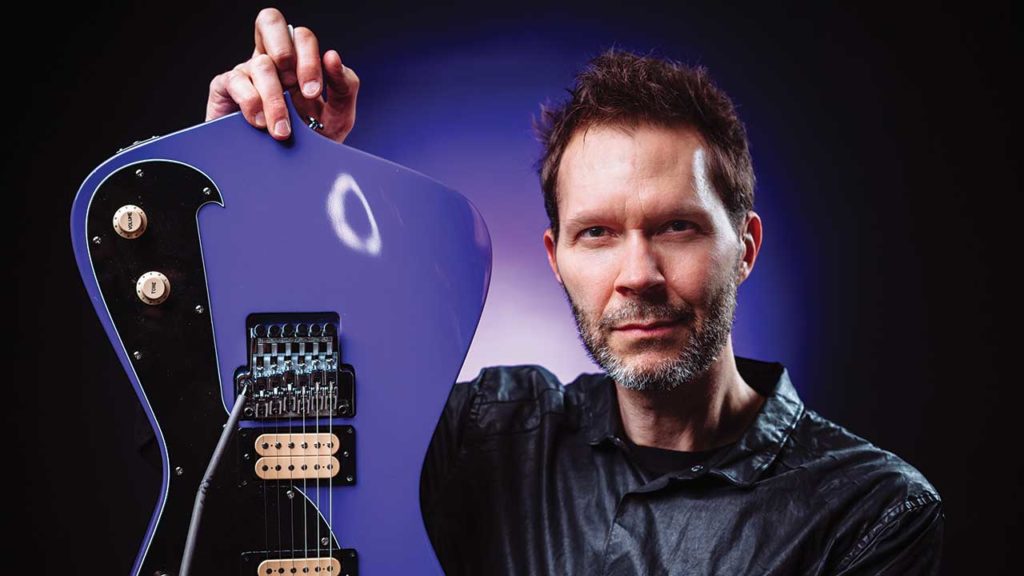 When bass guitarist Billy Sheehan left David Lee Roth’s solo band in 1988, he and Gilbert co-founded Mr. Big, which included Pat Torpey on drums and Eric Martin on vocals. The band was initially successful in Japan but achieved international stardom with the 1991 release of their second studio album Lean into It. This album featured the acoustic ballad “To Be with You”, which received strong play on radio stations and MTV, rising to #1 on the Billboard Hot 100.

Mr. Big broke up in 1996, at which point Gilbert launched his solo career. When Mr. Big reformed soon after, Gilbert, who was already committed to his record contract, was replaced by Richie Kotzen. Mr. Big disbanded again in 2002, but Gilbert reunited the original members in June 2009 for a worldwide reunion tour. The band recorded a new album with producer Kevin Shirley titled What If… The album was released in Japan on Dec. 15th, 2010, in Europe on Jan. 21st, 2011 and in the U.S. in Feb. 2011. A tour to support the album kicked off at the Hollywood location of The House of Blues on April 2, 2011, followed by several dates in Japan. In May and June 2011, the tour continued in Taiwan, China, Korea, The Philippines, and Europe.

In September 2014, Mr. Big released …The Stories We Could Tell, produced by Pat Regan. During the recording of the album, it was revealed that drummer Pat Torpey had been diagnosed with Parkinson’s disease. For the tour that followed, Mr. Big enlisted the help of drummer Matt Starr of Burning Rain, to take over Torpey’s drumming duties, whilst Torpey acted as “drum producer”. Torpey did accompany the band on the subsequent tour, playing hand percussion, providing backup vocals and drumming on a few tracks per show.

The band released their 9th studio effort, Defying Gravity, on July 7, 2017. It would be the last album to feature Pat Torpey and first to feature Matt Starr taking over the role of drummer.

What’s He Up to Today?

In 2020, as coronavirus has shut down live music venues in Portland, and most cities nationwide, Paul Gilbert’s career remains on “standby” as he waits with hundreds of other musicians around the world for that moment when they can go back to work and hit the stage.

In the meantime, you can view recordings of his live performances and listen to his albums, on Spotify and your favorite streaming music service.

Jamaal Lane, A Portland Business Owner, Refuses To Give Up
Brad Cloepfil - Architect