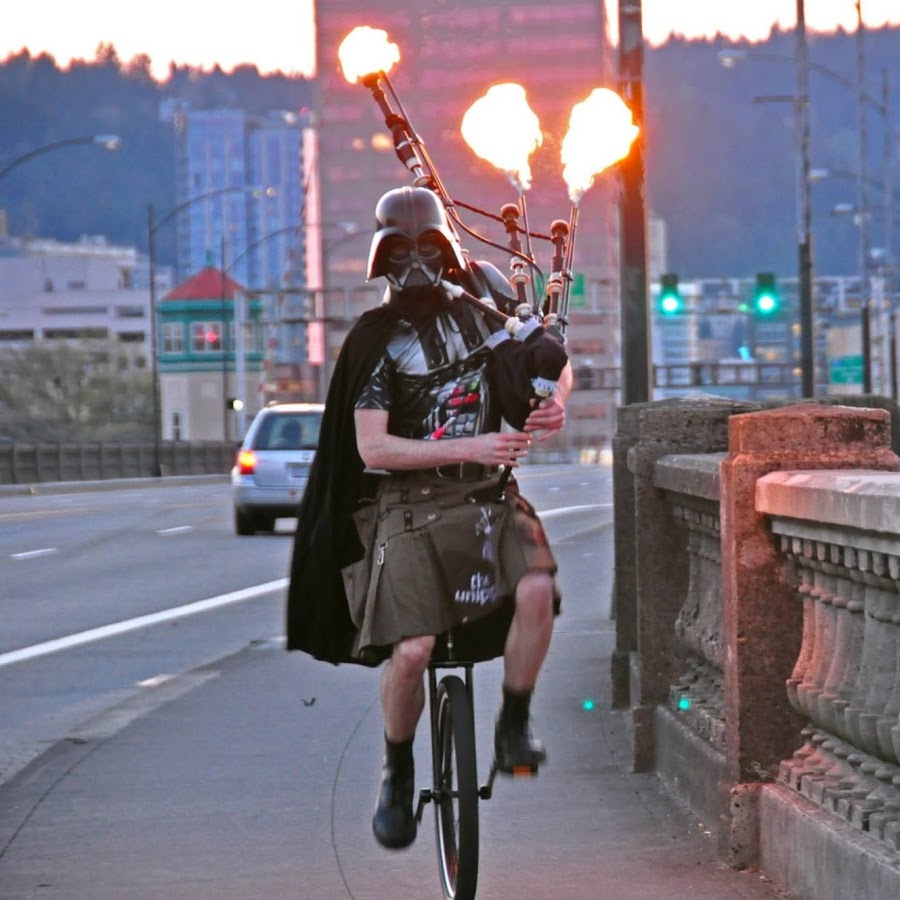 PORTLAND, Ore. – There’s no doubt that Brian Kidd, Portland’s Unipiper, is by far one of the most unique people to gain worldwide acclaim over recent years thanks to his fantastic ability to play the bagpipes, dressed as Darth Vader, while riding a unicycle.

Although Brian Kidd has earned a celebrity status online and on TV thanks to appearances on television shows like Jimmy Kimmel live! the reality is that he’s just doing what most all other Portland Creatives have done in the past, Keep Portland Weird. 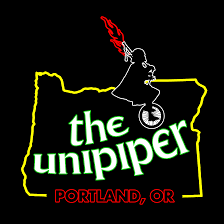 Like many people, Brian Kidd came to Portland from another state in search of opportunity and in a city, that embraces the eccentric and the weird, Brian created his Unipiper character and instantly fell at home here.

The Unipiper is an American performance artist whose work regularly combines unicycling with playing the (sometimes flaming) bagpipes. The Unipiper first found Internet fame in 2011 when a video of him performing The Imperial March went viral. The video featured The Unipiper wearing a Darth Vader mask while riding a unicycle and playing the bagpipes and was subsequently featured on The Tonight Show with Jay Leno. His other mainstream media appearances have included America’s Got Talent and Jimmy Kimmel Live!. He has since branched out into performances referencing non-Star Wars fictional elements, including Game of Thrones, Batman v. Superman, and Pokémon. His antics as Uncle Sam have attracted international attention

Although the Unipiper seems tailor-made for the age of YouTube (and indeed that video topped 1.8 million views this month), his origin story begins in 2005. While Kidd studied marine biology at the University of Virginia, he found a unicycle in a dumpster and learned to ride it over the course of three weeks. He had already begun learning the bagpipes with a local group of pipers, though it took him a year to become truly proficient. He started by playing the practice chanter, a sort of training-wheels instrument that is bag-free, making it blessedly quiet.

After graduation, Kidd moved to the Outer Banks of North Carolina and began a paid internship at an aquarium. He found that he was the only bagpiper for hire in the area, and often performed at weddings and funerals. “Weddings were usually around $250, funerals were $150,” he says. Although he also rode his unicycle from time to time, he had not yet combined the two disciplines.

The two hobbies came together one fateful evening in 2007 after Kidd and his friends from the aquarium had been drinking. While he says he had thought about bagpiping while riding the unicycle before, he had always been afraid of falling off and damaging the pipes. That’s a real concern when a good set of pipes runs north of $1,500.

A healthy dose of beer eliminated that worry. When a friend asked Kidd if he was capable of playing the bagpipes while riding his unicycle, Kidd put down his Corona and said, “You know, I bet I could.” And so he did. 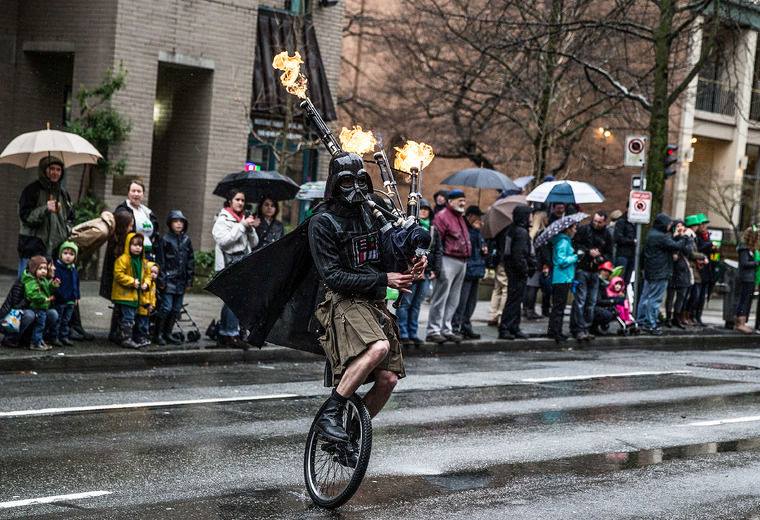 Through the years Brian Kidd’s videos have been viewed millions of times and have seen all over the internet, including on websites like YouTube, but there’s no doubt that he’s best known for wearing the Darth Vader mask and  playing his rendition of the Imperial Death March.

Besides the Darth Vader mask what really ties the whole routine together is the flames that Brian is able to shoot out of his bagpipes.

“This year I added flames.” After seeing YouTube videos of other bagpipers whose pipes emitted dramatic bursts of flames, Kidd did some research. “I discovered that there’s a company in Australia that specializes in making flaming versions of all sorts of different things, including bagpipes. I worked with those guys to make a mount, custom for my bagpipes, and that was that — it seemed like a natural evolution.”

The system includes a propane tank, a small pilot light on each of the three drone pipes, and a button that allows him to release a burst of fuel.

Keeping People on Their Toes

What’s great about Brian Kidd is that he’s not one to sit around and enjoy the fame he’s earned from being Portland Oregon’s Unipiper, he constantly working on new routines and wearing new costumes that tie into famous video games, movies and more.

“People are constantly telling me how I’ve become a symbol for this city, and as long as that holds true, I have a great responsibility,” he says pointing to his bagpipes, emblazoned with the words “This Machine Keeps Portland Weird”. According to Brian, The Unipiper is out to challenge people’s expectations and redefine the word ‘possible’ when it comes to the bagpipes. When asked about future plans for the Unipiper, Brian says, “there’s no roadmap for being The Unipiper, but one thing is for certain: The Unipiper will continue to surprise and in ways, you might least expect. Keeping people on their toes is what I’m good at.” 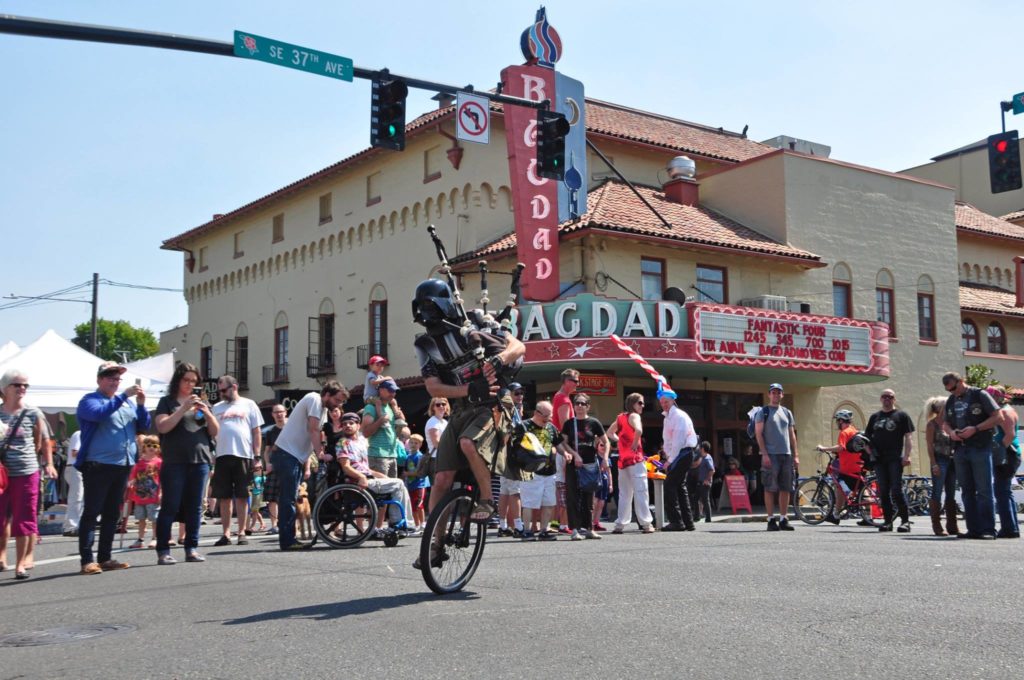 10 Years in The Spotlight

Unlike other internet celebs who have come and gone over the years, Brian Kidd has continued to remain a top personality online thanks to the uniqueness of his act and ability to keep his routine fresh with the changing times.

After years of fame online, and the nice side income that has come from appearing on TV shows across the United States, Brian Kidd does have a day job working as an acquisition manager for a local company in Portland Oregon.

Between balancing the responsibilities of his job and recent marriage, Brian Kidd still gets calls from time to time to appear on national TV.

Kidd was recently invited to appear on the new version of The Gong Show thanks to one of his friends who is also a producer on the show.

Kidd was too young to have watched “The Gong Show” back when it debuted in 1976, with creator/host Chuck Barris gleefully welcoming amateur acts who were frequently so awful the celebrity judges would bang a gong to make them stop.

“Growing up, my parents would tell me about it,” Kidd says of “The Gong Show.” He’d seen clips on YouTube of such characters as Gene Gene the Dancing Machine, and the Unknown Comic (who performed with a paper bag covering his head.)

Beyond that, Kidd was familiar with how “The Gong Show,” with its outrageous acts and celebrity judge wisecracks, had become part of popular culture.

“It’s pretty exciting to be on something that has such a rich history,” Kidd says.