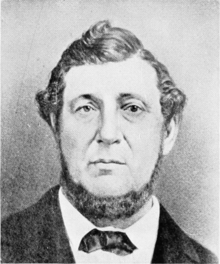 PORTLAND, Ore. – In 2016 many people are familiar with Couch Street in Portland Oregon but are not familiar that the street was named for one of Portland’s founders, Captain John H. Couch, who laid claim to a portion of land in the 1840’s that would eventually become Northwest Portland Oregon.

In the 1840’s Captain Couch left his family in Massachusetts and sailed to the “Oregon Country” as it was known at the time. Oregon was literally a wild place to live since the territory was unsettled and sea captains had to deal with hazardous conditions, especially on the Columbia River, which was considered to be one of the most treacherous places on Earth for navigation due to a large sandbar which trapped many ships there over the years.

Captain Couch didn’t let the fears other Captains had of the Columbia River stop him, and in 1842 he sailed up the Columbia River and Willamette Rivers to Oregon City, which was the biggest settlement in Oregon Country at the time, and was still being disputed between Great Britain and the United States.

Upon his arrival in Oregon City, Captain Couch would be appointed treasurer of the Provisional Government of Oregon and when news was announced of the Gold Rush in California, Couch would make a fortune sailing supplies from Portland to San Francisco before he built a massive wharf and warehouse that was used for sending supplies to the gold rush trade in California.

Captain Couch died in 1870 and was buried at River View Cemetery but his legacy lives on in the form of Couch Street, Couch Park, and F Street which was named in honor of the Captains long time business partner Flanders.

As in public employment, so in private life. He was an exemplary citizen, and so genial and whole-souled in disposition that he was personally known and esteemed by every man, woman and child in Portland. What is known as Couch’s addition to Portland was his donation claim, but little of it now remains uncovered by residences or buildings devoted to the various trades, manufactories and enterprises known to the city. Early in life Captain Couch was married to Miss Caroline E. Flanders.