PORTLAND, Ore. – If you’re in business for yourself, or are planning on getting started as an entrepreneur, Chris Guillebeau is one of the most well-known names in personal development because like Gary Vaynerchuck and Anthony Robbins, he’s not just a blogger and speaker, he’s also an entrepreneur as well who lives in Portland Oregon.

By his early 20’s Chris Guillebeau knew that “non-conformity” would become the theme of his life because as his contemporaries were going to college and getting six figure salary positions after they graduated, he was mapping out the goals for his life and set extraordinary plans including a goal to visit every country in the world before he turned 35.

During his 20’s and early 30’s Guillebeau would also start his blog “The Art of Non-Conformity” which would become one of the 15,000 most visited websites in the United States.

Unlike other travelers who just want to get to their destination to enjoy the place where they are, Guillebeau thrives on enjoying the journey, or the travel process itself, and over the last few years thousands of people around the world, especially Millennials, have followed his example, often traveling the world while generating incomes online.

Where are his favorite destinations in the world? For a guy who literally has seen the world, it’s hard to pin him down on admitting which part of the world he favors the most because he loves different parts of the Earth for different reasons but in a recent interview he opened up and admitted that he loves Hong Kong, South Africa, Zanzibar, and Macedonia.

While he was traveling, starting multiple businesses, and seeing the world, Guillebeau would accomplish his goal of visiting every country in the world when he visited Norway and threw a party with his friends and family to celebrate the occasion.

After accomplishing his travel goals he’s continued to make travel an integral part of his life, and he travels to roughly 25 countries per year; he also frequently writes about his travels and uses his blog to connect with other travels who are interested in seeing the world just like he did. 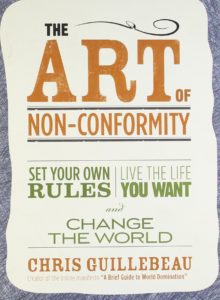 Chris Guillebeau has developed his art of non-conformity to become a manifesto or brand that millions of people around the world follow who are not interested in following the status quo or conforming to what other people think they should do in life.

One of the biggest reasons for Guillebeau’s success if the fact that he was in the right place, at the right time, since his first book came out shortly after the “Great Recession” and many people lost incomes, savings, homes and the lifestyles that they previously enjoyed.

Chris has been able to tap into the huge economic vacuum left from the recession and teach people how to start living and earning incomes without having to rely on their jobs or others like they may have in the past.

Chris’s first book, The Art of Non-Conformity, was translated into more than twenty languages. His second book, the $100 Startup, was a New York Times and Wall Street Journal bestseller, selling more than 500,000 copies worldwide. His third book, The Happiness of Pursuit, was published in September 2014 and was also a New York Times bestseller. His fourth book, Born for This, will help you find the work you were meant to do.

Every summer in Portland, Oregon, Chris hosts the World Domination Summit, a gathering of creative, remarkable people with thousands in attendance. Chris is also the founder of Pioneer Nation, Unconventional Guides, the Travel Hacking Cartel, and numerous other projects.

Unlike some motivational or personal growth writers/speakers who have faded from public life in recent years, Guillebeau has released a new book almost every two years and his latest book, Side Hustle, teaches how anyone can take a money-making idea and turn it into income within 27 days.

Since releasing his first book, Guillebeau also held his first live event in Portland called “World Domination Summit” where entrepreneurs and people who have the desire to live awesome lives could meet to connect with each other, inspire, plan and acquire the tools to live an awesome life.

Fast forward to 2017, and we’re still exploring that question every summer with an in-person gathering that has now included more than 10,000 people from all 50 states and more than 40 countries since we started. The stakes and stories have grown each year with activities like Bollywood dancing, Academies, Guinness World Records, and the creation of a foundation that offers grants to individuals to pursue their dreams and positively impact their community. We call them “Scholarships for Real Life”.